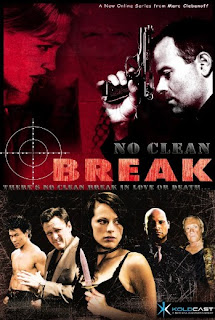 "No Clean Break" had its official premier on Koldcast TV on January 25th,2011. The series is also available on Blip TV, Boxee, Flingo & Roku. New episodes will be released every Tuesday for the next 20 weeks.

"No Clean Break" is an action crime drama online series, shot like a comic
book come to life. Frank, an introverted hit man whose preferred method of murder is
poisoning his victim’s drinks is enlisted to carry out an unusual job. When the city’s crime boss, known only as “The Man”, discovers that he’s terminally ill, he hires Frank to carry out his own assassination. “The Man”, however, is selfish and jealous, and doesn’t want to die alone, and makes it clear to Frank that he is to take out the woman he loves in addition to himself. When Frank discovers that The Woman is his own long lost lover, Frank alters the job making himself the next mark. In an action-packed chain of character-driven events, riddled with dark humor and visual spectacle, Frank and The Woman take on the many enemies set out before them before they can free themselves from The Man’s jealous grip. “No Clean Break” Stars: Frank Krueger, Sarah Thompson (Angel, 7th Heaven), Chad Everett(Mulholland Drive, Medical Center), Michael Madsen (Reservoir Dogs, Free Willy,Species), Mackenzie Firgens (Groove, Rent, The Hamiltons), David Carradine (Kill Bill, Kung Fu), Charles Durning (Dog Day Afternoon, Tootsie, O Brother, Where Art Thou?)Matthew Jone(General Hospital), James Russo (Donnie Brasco, The Ninth Gate,Public Enemies) and Xin Sarith Wuku. Original Music by Peter DiStefano. Produced by Luca Palanca, Frank Krueger & Marc Clebanoff. Written & Directed by Marc Clebanoff.For more info on the new hit series “No Clean Break” log onto;
http://www.NoCleanBreak.com or on Koldcast TV: http://www.koldcast.tv/show/no_clean_break
Posted by DAILY FILM FORUM at 8:33 PM