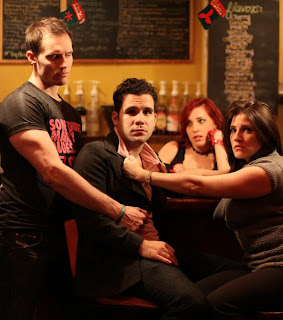 Saturday night was a night to remember as super swanky New York City’s Foundation Lounge played host to the official wrap/cast party for the upcoming new hip comedy film “BIdentity Crisis” hundreds showed up to attend the much talked about event while others waited on line, the ones lucky enough to make it on the guest list and through the ropes to the vip area got a chance to mingle with the cast and watch the partying crowd dance to the beats of DJ Shakez on Foundations famed stripper pole! BIdentity Crisis Director Jana Mattioli whose other soon to be released film “An Affirmative Act” hits theaters March of 2011 also celebrated her birthday that night and was all smiles while enjoying the success and completion of her new hilarious film. Those in attendance for the tight listed event were the starring cast of “BIdentity Crisis” Elissa Goldstein, Keith Collins, Edvin Ortega, & Steve Wolf along with An Affirmative Act’s Candice Holdorf, Film Producer Ken Del Vecchio, Village People Cowboy Randy Jones & Former NY Yankee Billy Sample.For more info on BIdentity Crisis and release dates visit www.BIdentityCrisis.com To get on the guest list at Foundation log onto www.FoundationNYC.com
Posted by DAILY FILM FORUM at 12:03 AM