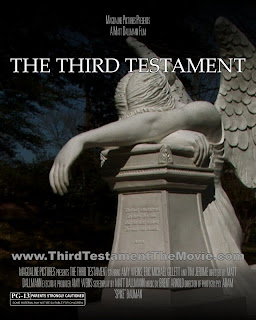 THE THIRD TESTAMENT which will be released on DVD Tuesday, March 8th, 2011. In this nail-biting feature film debut from writer-director Matt Dallmann, the mysterious disappearance of a Christian missionary investigating the so-called "Third Testament" sets off a chain of events that lead to the stunning revelation of a dangerous religious doctrine suppressed for years behind a murderous cover-up. THE THIRD TESTAMENT follows the discovery of four lost gospels that are included in the canon of the bible as the third testament. Some believe the gospels are fake, while others believe their discovery will lead to the improvement of humanity. For one nonbeliever, it is the key to finding her husband, a documentary film maker gone missing after interviewing the archeologist who discovered the missing gospels.


“THE THIRD TESTAMENT” opens with documentary footage of an interview gone wrong: a man, who we later learn is the famous Phineas Black, viciously attacks his interviewer, then static and darkness.

Archived news reports light up the screen, telling the tale of a documentary filmmaker gone missing. Bit by bit, it is revealed that the missing filmmaker, Jacob Matthews, was interviewing Phineas Black in an effort to debunk his latest archeological discovery, The Third Testament to the Bible.

Through several interviews with professors, historians, and archeologists, we learn the history of the gospels that make up the Third Testament. And like the New Testament before it, this new edition to the canon of the Bible has changed religious doctrine held sacred by so many followers for so many years.

Carolyn, like her husband Jacob, does not believe in the legitimacy of the so-called Third Testament. She decides to confront the man responsible for her husband’s disappearance during visiting hours at his new home, the New Jersey State Prison.

Phineas, convicted of kidnapping and assault, with pending murder charges, sits across from Carolyn in a menacing way. They exchange barbs over faith and/or the lack of it. He challenges her beliefs as she sits unaffected.

Meanwhile, we learn through interviews with detectives, witnesses, friends and family that both Phineas and Carolyn had suffered great tragedies in life. Each had turned to opposite sides of the religious spectrum, Carolyn embracing it as a way to survive and Phineas denouncing it as a mind-controlling tool.

Determined to break Phineas of his silence on the whereabouts of her husband’s body, Carolyn continues to meet with him. Each time, Phineas drops subtle clues about an organization called The King’s Eight. The clues lead her deeper into Phineas’s life and his circle of friends. She discovers that all of the archeologists, historians, religious figures and financial donors that were involved with the discovery and implementation of the Third Testament are all somehow connected to this unknown group called The King’s Eight.

Each unveiling swings us in a new direction: Could the centuries old King’s Eight have fabricated the Third Testament? Did Jacob know? Was he a member? Despite it’s suspicious beginnings, is The Third Testament really a vehicle for the betterment of society?

We get our answers by the movie’s end. Against her instincts, Carolyn develops a fondness for Phineas… and makes a startling discovery. THE THIRD TESTAMENT Released by Magdaline Pictures will be available on DVD March 8th, 2011 for more info please log onto www.ThirdTestamentTheMovie.com
Posted by DAILY FILM FORUM at 12:01 AM