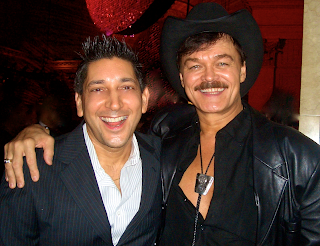 Beginning the New York State of Mind weekend on Thursday evening will be a special proposal on “Experience the Ride”, a unique 75-minute tour of NYC in a mobile theatre vehicle with family and friends. Popping the question with Manhattan’s sparkling lights as background could only be amplified by a pause at New York’s Columbus Circle and its glittering fountains as the party witnesses a spectacular pas de deux performed to Andrea Bocelli’s “Septiembre Amor”. (http://www.youtube.com/watch?v=tyhuXDtzwug)

Being longtime residents of New York City, and in true New York City style, the couple has selected City Hall for their Marriage Ceremony to take place Friday, September 13th, on Jones’ actual birthday. The mothers of both grooms and other family will be in attendance to witness the ceremony.

The VIP wedding Reception is taking place at the 13th Annual KINGS and COWBOYS Virgo Birthday Celebration of Randy Jones & Actor and nephew, Keith Collins at NYC trendy Rooftop Hotspot, “The DL”, 95 Delancey Street, on Friday the 13th with host celebrity author Mark Bego along with many special guests expected in attendance.

And finally, honoring the Italian heritage of Will Grega, a special appearance at the Feast of San Gennaro in New York’s Little Italy on Saturday, September 14th, will be followed by a true Italian banquet.

“Calling NYC home for four decades, and seeking Marriage Equality for nearly as long, we could not have chosen to be married in any other city in the world. New York is it. We LOVE New York!” said Jones.

Husband-to-be Will Grega is a Wall Street software developer. “I’m thrilled! The benefits are great. I now have a lifetime membership to the YMCA!”