CLEAN CUT Slashes Up The Competition With New Sadistic Trailer 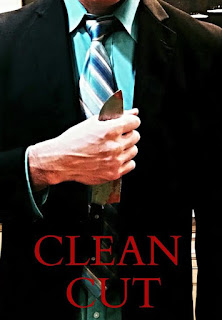 KEITH COLLINS – DOUG BOLLINGER - SAMANTHA ARTESE - MICHAEL BILLYSTAR IN THE NEW HORROR/THRILLER FILM “CLEAN CUT”
THE OFFICIAL TRAILER FOR "CLEAN CUT" MAKES AN INCISION  A thrilling first look at the highly anticipated new horror / psychological thriller film.
"The straightest people can be the most twisted"
The official trailer for the new award winning Horror / Thriller film, “Clean Cut” is finally released today. As we've said before this is the one to watch for 2016. We haven't seen a film like this in years. Bone chilling, shocking & sadistic watching this story unfold on the screen sends chills down your spine. The characters bring their all to the screen in this 1hr 17min long creep show. It fills your mind with fear and paranoia as the story unfolds on to the last 15mins of the film which completely sends you on one heck of a heart pounding ride wishing you never entered the theater. We give this thriller 4 out of 4 stars.

The trailer reveals the world of The Evangelist, a bible-quoting serial killer who has a small NJ town gripped with fear. Is he the same maniac from the past continuing his moral cleansing or a new, merciless angel of death.

The official trailer can be found on YouTube at
https://youtu.be/xmE-211GFQY

"Clean Cut" tells the story of Bill Horton who at seven years old watched in horror as a serial killer murdered his mother. Known as The Evangelist, he places a bible next to her body and quotes scripture as he leaves Bill alone and destroyed. Thirty years later, Bill has grown up and appears to be a model citizen, spending his days cleaning his house and baking. He has, however, picked up the mantle of the Evangelist, killing those who he finds wicked and evil and leaving a bible by their bodies. Bill only opens up to Dr. Laura Cooper, a psychiatrist, who discovers Bill's dark secret. She contacts young Detective Edward Legros who is working on the case with his cynical, veteran partner, Detective John Vance. But what Vance knows about the original Evangelist will lead to a bloody showdown.