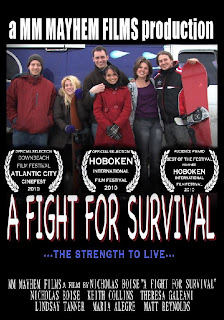 “A FIGHT FOR SURVIVAL” BECOMES AN OFFICIAL SELECTION AT THE 2010 DOWNBEACH FILM FESTIVAL PRESENTS ATLANTIC CITY CINEFEST OCTOBER 15-17th 2010 in ATLANTIC CITY NEW JERSEY AT RESORTS CASINO.
It’s no surprise to us that this suspenseful film is climbing the charts. After a successful run at the Hoboken International Film festival in June which “A Fight For Survival” was nominated best feature film of the festival via the audience award and will now screen Saturday October 16th 2010 5:00pm at the Downbeach film festival presents Atlantic City Cinefest at Resorts Casino. For more info on the festival & to attend the screening please log onto www.downbeachfilmfestival.org
Strongly suggest viewing this new film it will keep you on the edge of your seats the whole time!!
Six friends set out on a road trip expecting fun and adventure. The friends learn more about each other and their relationships then anyone could have expected. What happens next changes their lives forever. After only a few days on the road from New York to Alaska the group hits a patch of rough ice only to find themselves in a horrific car accident leaving the group to deal with loss and madness. The group is tested to their limits and left fighting for survival. Starring Nicholas Boise, Keith Collins, Theresa Galeani, Lindsay Tanner, Maria Alegre & Matt Reynolds Written and Directed by Nicholas Boise produced by MM Mayhem Films
For more info & release dates log onto www.AFightForSurvival.com
Posted by DAILY FILM FORUM at 12:06 AM