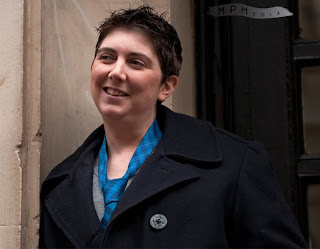 Filmmaker Jana Mattioli Currently on movie set in New York City and filming this winters new upcoming Comedy film “BIdentity Crisis” Taking some time to sit with us and letting us snap a quick picture. We caught up with Mattioli
who on the set that revolves around a NYC Café by day & transformed into a movie set by night. With lots of spectators and film crews running around surrounded by many lights and cameras, Mattioli was able to talk with us for a moment as we were eagerly waiting to find out more about “BIdentity Crisis” and what better way than being there right in the middle of the all action. Pleased to say we were able to find out so much more about this new Hilarious Comedic film. There are people in this world who long to be someone great, someone important, someone of great moral value, however, Helen and Phillip are not those people. Helen, originally from Chicago, longs to be the trendy "Sex in the City" girl, where she can have her party and dance at it to. Phillip, a good looking party boy who is in the bizz and is just the right amount of Carrie Bradshaw excitement she needs after a break-up with her loser ex-boyfriend Vinny. After dating for over a month Helen realizes that the trendiest thing about Phillip is hurting the relationship. True, Phillip is a party boy, but he likes to party with the boys.
Phillip is bisexual but wants to be with women. Helen wants to be trendy but is uncomfortable. They put a new stamp on "Be careful what you wish for, ya just might get it." With the help of a flamboyant waiter who recognizes Philip and a sassy cashier who loves to watch the drama unfold, BIdentity is a NY drama with a just the right twist of a gay lemon. "BIdentity" tells a story of coming out of the closet...sort of.
“BIdentity Crisis’ will be out early winter of 2011 & will hit the festival circuit. Produced by Mattioli Productions the funny film stars Elissa Goldstein as Helen, Keith Collins as Jamie & Lisa Kapchinske as Clara.“BIdentity Crisis” is directed by Jana Mattioli & written by
Zach Rothman-Hicks. We look forward to seeing “BIdentity Crisis” this soon. Sounds like one comedy ride not to be missed!
Posted by DAILY FILM FORUM at 12:09 AM