“A FIGHT FOR SURVIVAL” TAKES HOME THE GOLD 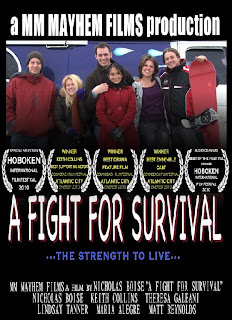 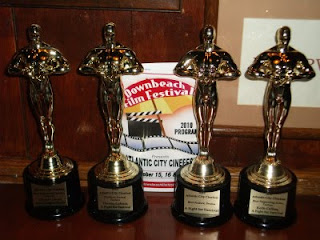 Quickly becoming one of 2010’s most sought after films, and rising up the festival charts Nicholas Boise’s “A Fight for Survival” had recently screened at the 2010 Downbeach Film Festival Atlantic City Cinefest and took home many awards. After being nominated for numerous categories at the festival including best overall feature film. “A Fight for Survival” took home the winnings for Best Feature film for the Drama category, Winner for Best supporting actor Keith Collins in a feature film, Winner of Best Ensemble cast in a feature film and Winner for Best producer for a feature film Theresa Galeani. This movie is suspenseful and riveting, it will keep you on the edge of your seats wanting more while clenching your fists, a must see for movie goers we give it 4 STARS!
The film consists of six friends set out on a road trip expecting fun and adventure. The friends learn more about each other and their relationships then anyone could have expected. What happens next changes their lives forever. After only a few days on the road from New York to Alaska the group hits a patch of rough ice only to find themselves in a horrific car accident leaving the group to deal with loss and madness. The group is tested to their limits and left fighting for survival. Starring Nicholas Boise, Keith Collins, Theresa Galeani, Lindsay Tanner, Maria Alegre & Matt Reynolds Written and Directed by Nicholas Boise produced by MM Mayhem Films.
For more info & release dates log onto www.AFightForSurvival.com
Posted by DAILY FILM FORUM at 12:08 AM