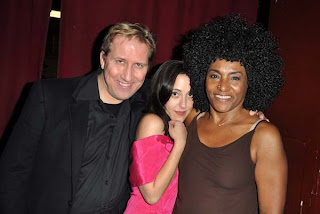 History was made Wednesday night when La La Brooks, the legendary lead singer of Phil Spector’s very first girl group, the Crystals took the stage at BB Kings Blues Club in New York City’s Time’s Square. Joining her on stage for the huge hit “Da Do Ron Ron” was Nicole Spector, Phil Spector’s 27 year old daughter. Also seen in the crowd, internationally known artist Mark Kostabi who said of the show “Lala's performance was first rate and the music was hauntingly beautiful last night at B.B. Kings. She had 10 back-up musicians. It was transporting and something about the red curtains, the epic sound and the 3 swaying back-up singers made me think of a David Lynch movie or other recent film directors that use that 50s/60s wall of sound.”
(photo credit: Derek storm)
Posted by DAILY FILM FORUM at 12:01 AM