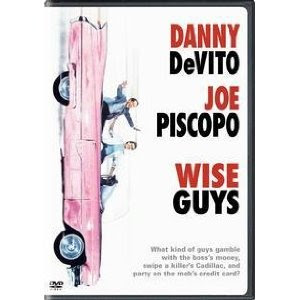 Downbeach Film Festival's Atlantic City Cinefest will host a 25th Anniversary screening of Wise Guys in The Screening Room at Resorts Atlantic City on October 16. The film, shot in part at Resorts, will close the three-day festival. Co-star, Joe Piscopo, will introduce the film and hold a Q & A afterwards. The annual awards ceremony follows the showing of the film, also in The Screening Room.

In Wise Guys, Piscopo plays Moe Dickstein, an errand boy for the mob. His partner is Harry Valentini, played by Danny DeVito. When they lose $250,000, they are set up to kill each other. But instead, they run off to Atlantic City and comedy follows. Brian De Palma, more aligned with crime dramas like Dressed to Kill and Scarface, directed the film based on a script by George Gallo. Harvey Keitel, Dan Hedaya and Patti LuPone also co-star.

Movie critic Roger Ebert wrote, "Wise Guys is an abundant movie, filled with ideas and gags and great characters. It never runs dry. It never has the desperation of so many gangster comedies, which seem to be marching over the same tired ground. This movie was made with joy, and you can feel it in the sense of all the actors working at the top of their form."

A Jersey native, Piscopo, has had a long career, not just in movies like Wise Guys and Johnny Dangerously, but as a cast member with Saturday Night Live during the first half of the 1980s. He’s also done dramatic turns in series like Law & Order. Piscopo, who also runs Club Piscopo at Resorts, will receive an award for his work.
Posted by DAILY FILM FORUM at 12:00 AM