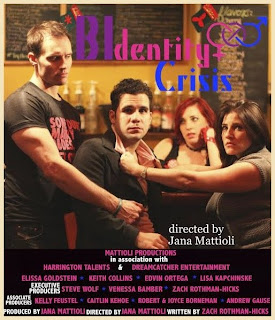 The Downbeach Film Festival presented Atlantic City Cinefest from October 14 to October 16, 2011. Continuing the tradition for the fourth year, this year Resorts Casino Hotel hosted the screening of the thirty plus shorts, features, and documentaries. This years Lifesaver Award was presented to success Scott Rosenfelt, who is most know for his production on hits such as Home Alone and Mystic Pizza. This festival has acclaimed itself on celebrating the art of film and giving independents a place to exhibit their work. Standing alongside such names in industry, Mattioli Productions in association with Dreamcatcher Entertainment is proud to announce it's nominations and winnings in the 2011 year for the short comedy, BIdentity Crisis.

With its tag line, "sexuality is like a light switch," BIdentity Crisis follows Phillip (Edvin Ortega) in his struggle to defend his bi-sexuality. His girlfriend, Helen (Elissa Goldstein), is not thoroughly convinced that his light-switch is "on" women as he claims, demonstrated through Phillip's flirtation with the flamboyant waiter, Jaime (Keith Collins). Outstanding other recent work including The Great Fight and Curiosity Killed The Cat, this particular performance earned Goldstein a nomination for Best Actress at the festival. Collin's performance, according to Time Square Gossip, is recognized as "unforgettable, laugh out load and outrageously funny." Holding previous nominations&wins for other films such as A Fight for Survival, he can add this years Downbeach win to his collection for Best Actor.

Nominated for Best Director, Jana Mattioli hopes that this will bring a light heart after her recent dramatic feature release of An Affirmative Act. From the courtroom drama of a married lesbian couples' arrest for fraudulent activity to adopt a child, BiDentity Crisis shifts to take the heat off and lightens the mood as it tells a story of coming out of the closet…"sort of."
Posted by DAILY FILM FORUM at 12:00 AM