"STUCK IN THE MIDDLE" TAKES HOME THE GOLD 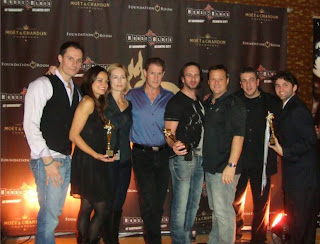 Stuck in the Middle won the award for best Comedy Feature Film while Stephen Fontana won Best Actor and Penelope Lagos took home Best Actress Award
The film was nominated for six awards overall including ones for directing, writing and a second best actress in a feature Jeanette Roxborough.

Stuck in the Middle was written by the brother team of Joseph and Billy Pepitone and directed by Joseph Pepitone and Carlos Duhaime. It was produced by Jeff Quinlan, John Summa and Carolynne Kish and stars Stephen Fontana, Penelope Lagos, Keith Collins, Jeanette Roxborough, Eric Etebari, Cash Tilton and Jack Mulcahy.
Posted by DAILY FILM FORUM at 12:00 AM