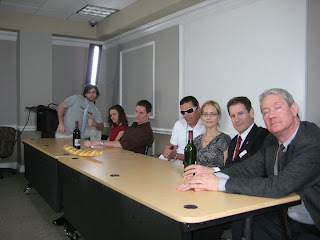 When I walked into the Tribeca Grand Hotel to see the premiere of the new independent film, Stuck in the Middle, I did not know what to expect. I had not heard about the low budget film and was unfamiliar with most of the cast and the team that made the film. After the screening, I now find myself wanting to know more about everyone and everything involved in this four star comedy!

Enter, Jeanette Roxborough as an angry, bitter secretary with language you wouldn’t expect to hear in hell, much less Purgatory. Roxborough’s delivery seems effortless despite dropping obscenities throughout the film and she shines in this role. She leads Cheevers to St. Peter’s office. He has recently been demoted from the Pearly Gates and he isn’t too happy about it. Cash Tilton plays Peter and he is definitely one of the many highlights of this film.

Then the real story starts as Cheevers meets his office manager Brooke Lynn Monroe. The sexy Penelope Lagos lights up the screen and plays Fontana’s straight man to perfection (with some great one-liners of her own). Obviously Cheevers falls for her and the two become friends and partners in crime around the office. This does not sit well with real estate mogul and Jesus’ agent Todd Levy (Keith Collins). Collins revels in this role with his arrogant, smug grin and over the top outbursts. Playing the guy who is trying to pull one over on Jesus makes Todd Levy an instant classic indie bad guy. Eric Etebari plays Jesus, the privileged, Boss’ Son. This is the hippest Jesus ever portrayed on the screen with a cool and cocky attitude and a love of golf that is as absurd as it is funny. As a practicing Catholic I found myself feeling guilty as I laughed at how Etebari and the writers took Jesus to places even South Park hasn’t, but I couldn’t help myself. And look for the ultimate pose down between two of history’s biggest religious icons that caps the brilliant gym scene.

And that leads me to Leo Balmudo, an alcoholic, who may or may not be Ronald Reagan. Perfectly cast as Leo, Jack Mulcahy channels Reagan and is a scene-stealer in this movie. Whether he is quoting Reagan or stealing a drink, Mulcahy’s deadpan delivery and background expressions adds so much more to the film.

Stuck in the Middle is well acted, well written and looks surprisingly good for an ultra low budget film. The script is solid, well paced, and hilarious. Brothers Joseph and Billy Pepitone wrote a screenplay that really satirized mundane office life and the use of Purgatory as a background allowed them to go way outside the box and poke fun at religious stereotypes. This is one of the best independent films I have seen in years.

Stuck in the Middle was co-directed by Joseph Pepitone and Carlos Duhamie and it’s production team includes veteran Executive Producer Jeff Quinlan along with John Summa and Carolynne Kish. Duhaime also shot the film.
Posted by DAILY FILM FORUM at 12:00 AM