MOVIE SPOTLIGHT - "COFFEE AND A BITE" 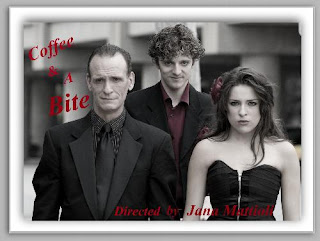 How long can you live a lie before you forget who you really are?
When 3 troubled individuals living as "vampires" enter The Cup, there's more to them than their Gothic lifestyle. Jonathan, Lydia, and Vlad aren't typical guests of The Cup. They have been living as "vampires," even stalking their own victims. When Jonathan approaches a man Lydia is warming up to, Vlad is appalled not only that Jonathan would steal Lydia's "food," but that he would pursue another man!
Even though everyone in The Cup seems to avoid the “vampires,” waitress Andrea goes an extra mile out of her way to evade the table. Leaving only Jamie to serve them, he must endure fake foreign accents, corny jokes, and becomes the subject of a bet leading to mistaken identities of the most awkward kind!
When the “vampires” decide to analyze the characteristics of the “perfect” vampire, an argument quickly ensues between homophobic Vlad and bisexual-enthusiast Jonathan. While Lydia is caught in the middle, she struggles not only with her opinion of the issue but her view on sexuality in general. A story of friendship, prejudice, and self-discovery, "Coffee and a Bite" will leave you wanting seconds! A sexy and comical tale about coming out of the "coffin." "Coffee and a Bite" Directed by Jana Mattioli written by Kelly Feustel starring Clifton Lewis, Thomas Leverton, Rachel Filsoof, Keith Collins, Bobby Walker, Danielle Erin Rhodes, Steve Wolf and Edvin Ortega. Produced by Mattioli Productions in association with Dreamcatcher Entertainment. Executive Producers: Robert and Joyce Borneman, Greg Jackson, and Steve Wolf. Coffee and a Bite, Look for it out this winter 2011.
Posted by DAILY FILM FORUM at 12:40 PM