Hysterical "Coffee and a Bite" Films 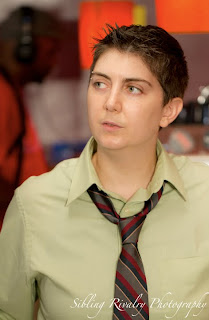 After a great day of shooting for upcoming film “Coffee and a Bite,” we met up with director Jana Mattioli, famous for her many fantastic contributions to the LGBT film industry. Her directorial repertoire ranges from drama to comedy and everything in between, but she admits that an LGBT film about vampires is “a first” for her. She tells us that “it’s going to be great” and gives her praises to the talented cast and crew working on the hilarious film "Coffee and a Bite." With all the hits she’s created in the past, we have no doubt that “Coffee and a Bite” is going to be terrific!

“Coffee and a Bite,” written by the brilliant Kelly Feustel, is both the unique story of learning to be true to oneself and a clever exploration of the vampire subculture with just a bit of camp thrown in that is sure to keep audiences laughing.

As one of The Advocate’s “Forty People Under 40 To Look Out For” in the May 2011 issue, Jana Mattioli (An Affirmative Act, BIdentity Crisis) is both an acclaimed and talented director and a prominent LGBT community activist. Mattioli is the name to watch for in the independent film scene! Her recent celebrated feature “An Affirmative Act” debuted in theaters across the nation this past April and will be soon be released for sale on Amazon.com on October 11th 2011. As the director of “Coffee and a Bite,” it’s sure to be both hilarious and fantastic!

On this day at the cup, three unusual regulars come by for a “bite.” There’s the classy but homophobic, Transylvanian-wannabe Vlad (Clifton Lewis), the handsome, bisexual Jonathan (Thomas Leverton), and the sultry but conflicted Lydia (Rachel Filsoof). Also at The Cup on a date are Josh (Bobby Walker), the good-looking gay professional, and Phillip (Edvin Ortega; BIdentity Crisis), the flirtatious bisexual whose last date at The Cup ended hilariously disastrous. And then there are all the other patrons, trying to avoid the sickeningly lovey-dovey couple and the odd blood-sucking trio.

As the boys’ date goes from cavity-inducing sweet to deliciously, side-splittingly dramatic, the vampires enter a long discussion over what makes a “perfect” vampire. Vlad and Jonathan enter into a heated debate about sexual orientation and, as the verbal brawl goes on, it becomes clear that Lydia is struggling with her lesbian feelings for the one that got away: Andrea, the spunky Cup Coffeehouse waitress played by Danielle Erin Rhodes. Returning to the Cup to complete this five star cast are Keith Collins (Stuck in the Middle; BIdentity Crisis) as Jamie, the sassy gay waiter, and Steve Wolf as Chase, the slimy straight guy determined to pick up a lesbian.

Will Chase succeed at this endeavor? Will Lydia and Andrea be able to pick up where they left off? And was Josh and Phillip’s date doomed from the start? With such a motley group of people at the Cup, who can really say? All we can say is that “Coffee and a Bite” is going to be a hit!
This film is produced by Mattioli Productions in association with Dreamcatcher Entertainment. Executive Producers: Robert and Joyce Borneman, Greg Jackson, and Steve Wolf.For more info log onto;
www.coffeeandabite.com
Posted by DAILY FILM FORUM at 8:16 PM