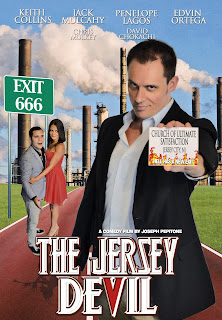 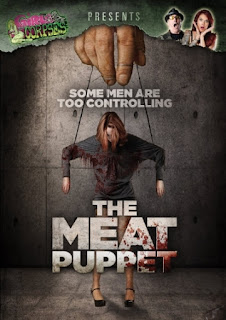 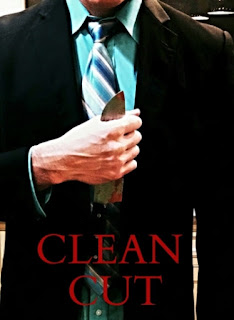 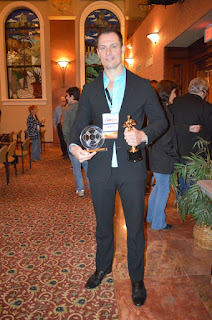 We had the wonderful opportunity to speak with one of the hardest working guys in the business. From having such an impressive film resume, to continuing to produce, star in and create some of the greatest independent films. Keith Collins has proven himself as a leader in the film industry.

For those that might not be incredibly familiar with Keith Collins you will be soon, he's been in the film industry putting in his dues working in many areas. Collins has appeared on such television shows as "Guiding Light" and "Sex and the City", has had starring roles in blockbusters such as "Stuck in the Middle", "Games People Play: New York", and “The Coffee Shop” to name a few, He is a multi-award winning actor & producer, been featured in numerous media publications, he continues to pick up more and more acting credits in a variety of genres, generally all garnering critical praise with each.

I was thankful to get a few moments to talk with the Actor/Producer about his latest project, experiences & more. Here is our story.

Daily Film Forum Exclusive::
From “The Meat Puppet", “The Jersey Devil” and the highly talked about “Clean Cut” join us for
A moment with
Keith Collins

DFF: Keith, thank you for this opportunity we’ve been wanting to talk with you for a while now. Lets get right into it. “The Meat Puppet” you created, produced and star in it. One of our favorite films and we hear its doing extremely well. how did you morph into such a vile character Andrew Shelton?

KC: Well thank you so much pleased to be here with you. The Meat Puppet was extremely challenging my character Andrew is such a tortured guy with so many years of abuse it definitely wasn’t the easiest thats for sure. I had lots of passion for the project and andrew became apart of me for months bringing him to life was like a relief and portraying him on the screen was such a goal for me the hardest part was living with him in my mind while filming. Glad he is put to rest finally!

DFF: We bet! Such an astonishing performance from you in the film we really felt it. The reputable TomCat Films distributed it. Where is “The Meat Puppet” currently available now?

KC: Yes TomCat Films and its also presented by Girls And Corpses which have done great for the movie. The Meat Puppet is available in many retail outlets worldwide such as Amazon, Best Buy, Barnes & Noble, Target etc.

DFF: From psychological thriller to comedy, your new film “The Jersey Devil” has had some tremendous success with just being released a few short weeks ago. We have heard it sold out in all sales outlets in less than 6hrs of being released? Tell us Mr. Devil about the indie comedy that seems to be rising off the charts.

KC: YES! it did! The day it was released it literally flew off the shelves. Was a very surreal feeling. Its doing extremely well i couldn’t be more pleased! And thats James Burnett, I don’t go by Mr. Devil to cache LOL. My character (James) was one of the most wackiest i have played and I loved it! The Jersey Devil is a fantastic comedy film. It was a pure joy to be on set everyday with an amazing cast and crew. Nothing but respect for all who were involved with the project.

DFF: Wow. You don’t hear about films doing that this much these days. Tell us more about it and how it feels to be referred to as The Jersey Devil.

KC: You don’t which is why its such a great feeling especially when you see everyone who worked so hard on it be able to enjoy the success. As far as being called the jersey devil, I blame Joseph Pepitone & Billy Pepitone for that! but its a great thing. Joseph and Billy wrote the fantastic script i remember when joe who also directed the film had first told me about it I was all for it such a funny screenplay. They worked very hard on making it. its a masterpiece of a clever comedy.

DFF: It’s a very good comedy film. The prestigious Shami Media Group are the ones behind the distribution correct? Clearly they have really marketed it in a good light.

KC: Shami Media Group is a great distribution company. Led by industry leader Bob Shami they are a heck of a operation. I fee they did a fantastic job with all the distribution and getting the film out to as many places as possible. to see you film on Amazon, Target, F.Y.E., Best Buy, Sears, Kmart & many others and to know that it was sold out so quickly really says something for the distributor. A great job indeed.

DFF: Yes it says a lot. I’m glad we were able to get our copy when it finally became re-stocked. The feedback on the film has been extremely positive. Tell us about that and how you become The Jersey Devil in the film.

KC: Well basically the current devils term limits are up he’s gotta move on and a new devil is getting ready to take charge, however he doesn’t like where hell is and wants to relocate hell. He decides on relocating to Jersey City, NJ hence The Jersey Devil! Its a very funny watch to see all of these characters going at it. The feedback has been so positive really can’t ask for anything more. Great comments, reviews its been surreal!

DFF: Now lets go back to psycho talk Mr. Collins. Your latest film which is by far maybe the most twisted. “Clean Cut” is a very disturbing thriller. It completely scared us for days! You recently premiered it at Atlantic City Cinefest film festival with it winning two awards. The notoriety it has been getting is superb. How did “Clean Cut” come together.

KC: Clean Cut was or is the greatest project i have worked on so far. The cast, crew we all know each other it made things a lot easier while on set. The talent in Clean Cut really shows. I had the story for awhile and it didn’t feel complete one night i had a nightmare woke up put notes down and the next day literally finished the story. I had then called my friend and colleague Joseph Pepitone and asked if he & his brother would use their talents to pen the screen play. Within a short time Joseph and Billy did what they do best and delivered a heck of a twisted thriller of a script!

DFF: You have done numerous projects with them. What sets "Clean Cut" aside from the rest?

KC: We had so many things in place for Clean Cut. A complete filmmaking team. With a fantastic DP & Editor (Cory Green) an amazing AD & Actor (Doug Bollinger) & (Joseph Pepitone) Directing it. Rounding it out with original music by (Ron Bumblefoot Thal). It just takes the film to a whole different level of filmmaking. Its stellar and truly shows on the screen.

DFF: Where did you film Clean Cut? And whats its progress now?

KC: We filmed in Point Pleasant Beach, NJ & Bradley Beach, NJ. A great area to film. We are currently in the final stages of post production color, sound effects.

DFF: Bill Horton is another creepy role. The way you portrayed him was so convincing which is why its so scary too. You do bring characters like that to life very well. How was this one for you?

KC: Bill Horton is a NUT JOB! On a way different level then the others. Bill is more of an introvert. Very scary. The type of person who you could think of as harmless guy but really is the last person you would want to be left alone with. Think of it as if Mr Rodgers deciding to go psycho….well thats Bill Horton.

DFF: We can agree. When will “Clean Cut” be available to the public?

KC: Clean Cut will be released in 2016 sometime.

DFF: You were also personally honored at the Atlantic City Cinefest Festival as well. With all of your achievments in film what made this different?

KC: This was a special moment for me. I was awarded the Creative Growth Award. It was completely the greatest feeling. I was honored to be able to recieve that award in a room full of amazing talent, filmmakers & the festival committee. Something i feel so blessed about and will never forget.

DFF: Keith, thank you for all of your time it was a pleasure to speak with you.

KC: I thank you very much for having me.