MOVIE SPOTLIGHT - NEW COMEDY "THE JERSEY DEVIL" HITS IT OUT OF THE BALLPARK! 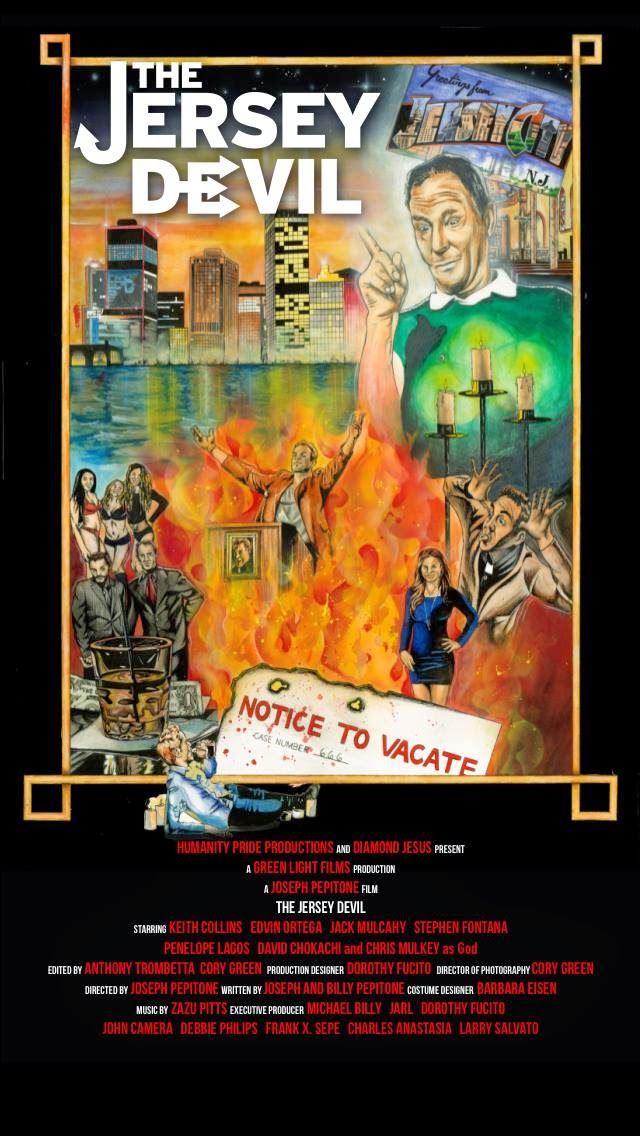 LAUGH WITH THE SINNERS!
New comedy film has a "HELL" of a lot of laughs.

The Jersey Devil is a new comedy film that has Lucifer losing his power and a new, up and coming Devil taking over and moving hell to…New Jersey.

The film had its World Premiere last night at the historic Loews landmark theater in Jersey City, NJ and it was an overwhelming success. The story is a great concept that pokes fun at Jersey’s reputation as an industrial abyss. The cast of characters are a motley crew of misfits that include Judas as Lucifer’s right hand man, Eve now in a loveless marriage to Lucifer and a Cool Hand Luke quoting God who is more concerned with his tee time than restoring the balance of the universe.

Joseph and Billy Pepitone wrote the screenplay that is original, funny and refreshing. They went all out with a barrage of great jokes and scenes that keep things light and fun. There are several stand-out performances including Keith Collins as James Burnett the new Devil, Edvin Ortega as Richard his Devil’s Advocate, Jack Mulcahy as Lucifer, Stephen Fontana as Judas and the stunning Penelope Lagos as Tori the hopeless romantic looking for a way out of Hell.

Highlights include Collins and Mulcahy (from Porky’s fame) going mano-a-mano in several scenes where they both elevated their games. The younger Collins even gets the best of the veteran actor on a few occasions. A poured-in her-dress Lagos mimicking a flaky game show hostess as she introduces new locations for Hell is sexy and hilarious at the same time. Fontana is best when he is reacting to Lucifer’s pathetic plans to win back Hell and Ortega is the wide-eyed lackey who doesn’t know when to keep quiet. Newcomer Michael Billy is insanely funny as Hell’s creepy, sexually confused pastor.

Chris Mulkey (Boardwalk Empire, Captain Phillips) adds a star presence to the proceedings as God and David Chokachi (Baywatch) is fun as the stressed out, zombie hunting sheriff.

There are very few complaints I have with The Jersey Devil. One, however, is a recurring gag with a foreign, ornery bartender that is a great premise, but falls a little flat because of the amateurish actor named Jarl (that’s right, one name). His delivery is forced and seems to throw off the otherwise precision timing of the actors that makes this film great. Mulcahy and Fontana work overtime, carrying one scene with him. This would have worked better with a real actor in the role.

Also directed by Joseph Pepitone, The Jersey Devil is a laugh out loud comedy that has fun with religion, politics, pop culture as well as itself. This one should not be looked over. I strongly give it 4 out of 4 stars and believe it has all the makings of a major independent comedy hit.