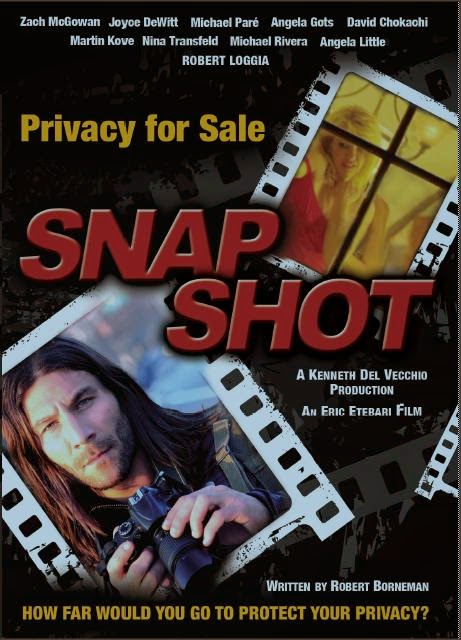 SNAPSHOT:: A jarring opening sets an intriguing start to a film about the emotional and political issues of privacy and defining the fine line between an individual’s right to privacy and the public’s right to know. “Your Privacy is for Sale” is a fitting subtitle.

The leading man, Thomas Grady (Zach McGowan - "Shameless", “Black Sails”) is a photographer, formerly at the top of his game, now down on his luck; but he accidently gets the money shot when least expected, a revealing photo of The First Lady (Joyce DeWitt - "Three's Company").

The President (Michael Pare -"Eddie and the Cruisers", “Lincoln Lawyer”) knows one thing – this photo cannot be seen by the public, it will ruin his chances for re-election, and probably his strained relationship with The First Lady. Enter Jack Adams (Martin Kove – “The Karate Kid” “Rambo”, “Cagney & Lacey”) his reliable right hand man, to do what needs to be done and “Make this go away”.

Veteran actor Robert Loggia (Academy Award nominee; "Scarface", “Big”, “Independence Day”) as Paul Grady, Thomas’ dad, brings his familiar class act to the screen, yet again in a wonderful performance. His other son Eddie (David Chokachi – “Baywatch”, “Witchblade”) has followed the family’s seven generations of community service within the Fort Lee Fire Department but not Thomas. No, Thomas has always been the rebel, and now he is on the precipice of dividing the family forever. Paul Grady holds out hope against hope that his son will do “The right thing”, the noble thing, but then Thomas comes up with this photo and threatens to ruin everything, for money no less.

Thomas and his girlfriend, Arianna played by the charming yet seductive Angela Gots (“Sex and a Girl”, “Dark House”) navigate uncertain times as the stakes rise. “Maybe you should take the money” Arianna taunts, “The public has a right to see this” but Thomas knows what the stakes really are all too well when he responds “This is a dangerous game we are playing”.

Directed by Eric Etebari (“2 Fast 2 Furious”, “Lincoln Lawyer”, “Cellular”) and written by Robert Borneman (“Rock Story”, “The Great Fight”, “The Life Zone”) who also served as Executive Producer with his wife Joyce Borneman called upon longtime friend, veteran independent filmmaker and writer Kenneth Del Vecchio to assemble a team that brings it all to life.

Borneman tells us Snapshot was inspired by the tragic deaths of Lady Diana and more recently Tyler Clementi, the Rutgers student who took his own life after his sexuality was exposed online. Borneman adds “I tried to draw a parallel between the damage that can be done by shooting someone with a camera and shooting them with a gun”.

We give Snapshot 4 out of 4 stars and strongly recommend the film to any movie goer. Snapshot is a complete success that goes above and beyond independent film making and when you think it’s over, get back in your seat, you can’t see the ending coming, in a style that adds a little more and then a little more culminates in a twist that audiences’ won’t see coming and that’s refreshing these days! A must See!!