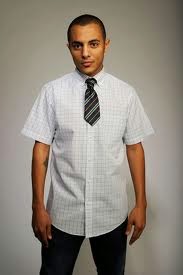 Daily Film Forum Exclusive::
Worldwide standup Comedian
from national tours and the hit documentary
"Just Like Us" join us for a moment with
Eman Morgan

DFF: A few of your films, recently “How to Be A Terrorist: In Hollywood with Abu Nazir” and the very noteworthy “Just like Us” – Tell us about them, and how you prepared for them?

Eman – How to be a Terrorist in Hollywood was a sketch we shot making fun of Arabs starting a “How to” school to help other fellow Arabs in need to further their career in Hollywood. Many movies require a stereotypical Arab terrorist role, so it defiantly sparked up an idea to poke fun of ourselves as we prepare for these roles. The producers saw me perform on stage prior to shooting this sketch, and they liked my comedy and stage presence, so they asked me to be a part of it.
Just Like Us was a documentary produced and directed by Ahmed Ahmed. It’s a great movie that illustrates how Arabs in the middle east are just like everyone else in the world; they too like to laugh!
Despite the many challenges and dangerous times they encounter on a regular basis, they just want to laugh and enjoy life just like us here in the states. The tour of comedians traveled and performed all over the Middle East and one stop in New York City.


DFF: How did the project come together in the first place, and how did you end up getting casted?

Eman - I was in New York at the time performing on stage for the New York Arab American Comedy Festival & Ahmed walks in & noticed how well my set was going & with the crowd. He immediately noticed that I also believed in the same value of entertaining Arabs. It was literally perfect how we met. What’s really amazing about the film is that it caught worldwide attention. I got emails & Facebook messages from people all over the world telling me how well they enjoyed it; finally there was a movie explaining to the world that Laughter is a universal language; and how adorable & funny I look in a short tie!


DFF: Are they available to the public to see? If not yet then when?

Eman - How to be a Terrorist in Hollywood can be seen on www.funnyordie.com, www.youtube.com
“Just Like Us” can be seen on Showtime, itunes, Netflix, DVD purchases online, ebay, amazon, anywhere dvds are sold.


DFF: What started you in Standup Comedy? Has this been a lifelong passion of yours?

Eman – I started in Stand up 10 years ago. This summer will be 10 years for me.
Out of 3 other siblings I was the only one that grew up craving attention and wanted to perform for anyone at anytime. For some reason, I love putting a smile on people’s faces. I grew up like that. My comfort comes for others being happy. My first night on stage I bombed so bad I said I’ll never do this again. A friend saw me a week later and convinced me to try it one more time. With nothing to lose and more to prove that I can do this, I tried it the second time and have not stopped since.


DFF: You are a very talented comic, where do you see yourself in the future to come what is your ultimate goal and or personal goal as a professional comedian?

Eman - I just moved to New York City a week ago. I’m defiantly enjoying the change in atmosphere and different culture here. Ultimately as a personal and professional goal, I would like to go on a world tour to do my style of comedy. When I write & perform comedy, I never like to base my set on one particular subject, group, sex or anything. I like to be very universal and talk about everything and everyone.

Eman – I have a couple projects in the works that I can’t speak much about just yet.
They will be announced hopefully by the end of summer. In the meantime, I am shooting a series of prank videos that will be released on YouTube.


DFF: What can you tell us about the career of yours, the ups and downs and did you receive a formal education on the subject?

Eman – I went through a very hard time a few years ago. I had a few hard personal problems that were affecting me at the time. And this was a time when I was traveling more, performing the most, and getting some good media attention. Despite that I was very hurt and damaged on the inside, getting on stage and performing for others was the medicine to my wound. I was going through a lot! But at the end of the night after a show, I would shake peoples hand, take pictures, sign shirts, etc. That kept me healthy and helped me get through my problems. I can honestly say that I learned so much from my downs. I turned the negative into positive. Rather than complaining and being bitter about the past, I changed the energy and focus to enjoy my future. It doesn’t take a genius to figure that out. However, believe it or not, some people don’t have the ability to do just that. I love volunteering my time. I’ll perform for charities, help feed the homeless on holidays, and try to be a better person because I was blessed with the ability and gift to make others laugh. I never forget to always be thankful and give back.


DFF: How would you describe yourself as a comedian?

Eman – A huge star in the making! :)
Very ambitious, smart, energetic, and extremely determined to get what he wants.


DFF: What Comedians / Actors inspire you?


Eman – Rather than just picking a big name and saying they inspire me; I’m actually inspired by anyone who is succeeding in life. I don’t just look at comedians. I look at everyone! Although, I would like to mention that lately I inspire myself more than others inspire me. I wake up every morning and say to myself, how can I be a better comedian? How can I be a better person? What mistake did I do yesterday that I can avoid tomorrow? These simple questions, plus being honest with yourself, will defiantly transform anyone to becoming only a better individual.


DFF: How about some of your personal favorite Comics to watch?

Eman- I am a huge Eddie Murphy fan. I can watch delirious and raw over and over.
Dane Cook, George Lopez, Russell Peters & Bill Burr are my favorite comics to watch live.

Just moved to NYC so I’ll be playing a series of shows here and around the east coast including Boston, DC, and New Jersey. Sunday May 4th will be an exclusive show @ Carolines in NYC I will be doing with a few other Middle Eastern acts.

DFF: Thanks Eman for the interview!